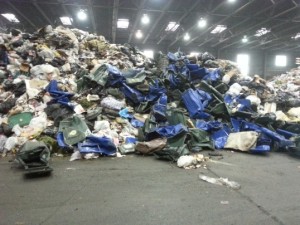 Garbage is a rare subject at your average cocktail party. But in Washington DC, trash — or the cans it goes in, at least — is a trending topic.

It started with the rush delivery of more than 200,000 shiny-new cans before the city’s primary election. That led to the odd problem of trash can proliferation, with old cans waiting weeks to be picked up and streets and alleys overflowing with extra bins.

Then there was the arrest and lockup of a little-known District artist for trying to repurpose (as flowerpots) several of the old cans that had been plastered with “Take Me!” signs. And the city’s overcorrection of the languishing can problem, which officials dubbed a “blitz” — cleared away not just unwanted cans, but even some recently delivered ones.

And now, it turns out that the city has not been recycling thousands of the cans, as the administration of Mayor Vincent C. Gray (D) had promised — but chucking them instead.

City officials admitted that sanitation crews dumped at least 132 truckloads of plastic bins — a third of the more than 16,000 old cans collected— alongside city waste and hauled them all off to Virginia to be incinerated.

This episode presents a setback to the District’s effort to reinvent itself as a well-managed city after decades of complaints of dysfunctional services.

“Trash-CanGate” is the byproduct of a badly initiated and badly run program. The $9 million program was to replace every city trash and recycling receptacle for the first time in a decade without a plan in place to collect the old ones.

Many of the new cans were delivered in the two weeks before the April 1 Democratic primary. They came with “Take Me!’ stickers to affix to old, unwanted ones, but the city had no plan to retrieve them.

So, Public Works Director William Howland responded by ordering a “blitz”, telling crews to pick up any can left on a sidewalk or in a public alley. But as the effort sped up, residents across Northwest reported seeing not the flatbed trucks that had been carrying away the old cans, but D.C. garbage trucks, which swallowed up and compacted the cans as if they were the week’s trash or recyclables.

The District has a contract to return unwanted cans to the manufacturer in North Carolina. But the process is labor-intensive resulting in the city delivering about 26,500, less than half of the total 71,000 cans collected.

With Mayor Gray advocating for a sustainable D.C., this was certainly a disappointing story to tell.